Bohemian residential region at Lorong 26 to 38 in Geylang

Bohemian residential region at Lorong 26 to 38 in Geylang.

Mentioning to Geylang, there are two views of the locale spring to mind. One is that of a place offering a myriad of F&B options, ranging from kiosks serving local food such as beef noodle and frog leg porridge, to a hodgepodge of Chinese, Thai, Vietnamese and Indian eating places which stay open until the night hours. The remaining place is its colourful and vibrant night life, with a myriad of pubs, KTVs and convenience stores in the traditional red-light areas located between Lorong 4 and 24, where streetwalkers ply their trade.

Because of Geylang’s bad reputation, that has kept many locals from placing it on their sight or calling it home. But there are two sides of this area that Singaporeans may forget. The lower half that veers towards Kallang is where the traditional red-light district lies, but the upper area that leans towards the upcoming Paya Lebar hub that is devoid of unsavoury activities.

Alan Cheong, head of research at Savills said that the one area which many Singaporeans tended to overlook is the stretch between Lorong 26 and 38. it was rather peaceful and safe there, just like any other residential neighbourhood. It was not noisy and completely unlike the lower-numbered lorong.

In actually, sections of this area have engaged in regeneration, with new developments containing smallish or shoebox-sized residential units spring up since 2010. Cheong added that that part of Geylang had been cleaned up and was home to families, couples and individuals then. That was why he felt safe walking around the area even at night.

There is one unique factor in Geylang that is rarely seen elsewhere in Singapore is a varied mix of residential properties. Old post-war terraced and detached houses will be found, shophouses and low-rise walk-up apartments intermixed with new modern apartment blocks, all on one street.

In the area, The increase in the number of new blocks with shoebox units , one-bedders measuring less than 500 sq ft, has prompted suggestions of an oversupply of such apartments. However, the truth is far from that. Cheong said that there might be oversupply island-wide, but not in this micro location of Geylang, where most of the apartments have been taken up. He added that was why he would invest in two shoebox units there as they were easy to lease out if he had $1 millition.

He notes that foreigners accounts for at least 75% of the tenants in the newer condos, with the remainder being locals who have been settled down in the area for a long time. He added that if going to the Paterson Road area at night, we would see many empty apartments. But in Geylang, a lot of them were occupied. 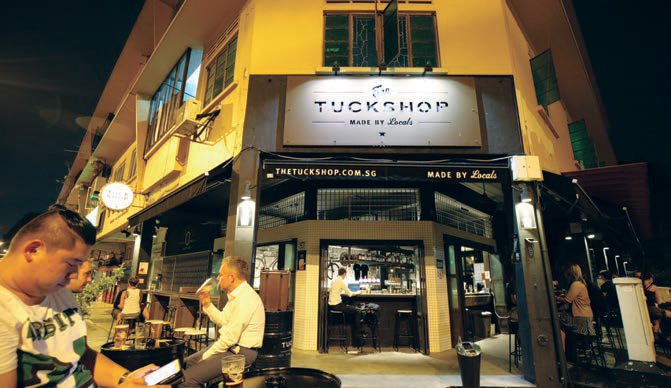 The vibrant night life at Geylang Road with pubs, KTVs and convenience shops in the traditional red-light enclave nestled between Lorong 4 and 24 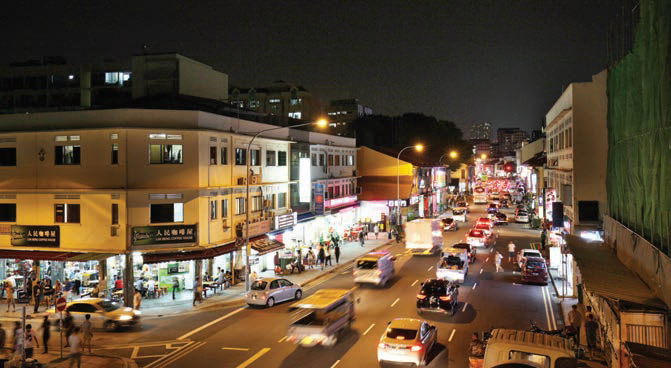 A senior group division director at ERA Realty, Mark Kong who has been marketing units in Geylang for the last six years, says the area’s main attract is its vicinity to the city centre.

Kong said that while it had never been known to be family-oriented, it was idel for singles or foreigners who work in the city. It was served by the Kallang and Aljunied MRT stations, as well as buses on Guillemard and Geylang Roads which took office workers to and from the CBD

Most people treat their residence as a hotel when they live in a shoebox apartment. Cheong said that they come home after work to sleep then got ready and went to work in the next day again. that's why it was popular with singles and married expatriate couples with no kids

The own checks and balances has been created because of the building growth in Geylang. Richie Chew, executive director of Teambuild Land, laments that the boom has pushed freehold land prices in the area up from between $300 and $400 psf per plot ratio in 2009/10 to the current price of over $700 psf ppr. This brings prices on a par with 99-year leasehold government land parcels.

Developers can build more units and therefore, enjoy higher margins in the government land sites, Chew said that developers were adopting a wait-and-see attitude when it came to acquiring land in Geylang for redevelopment. 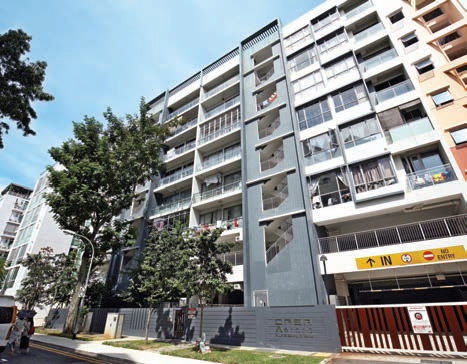 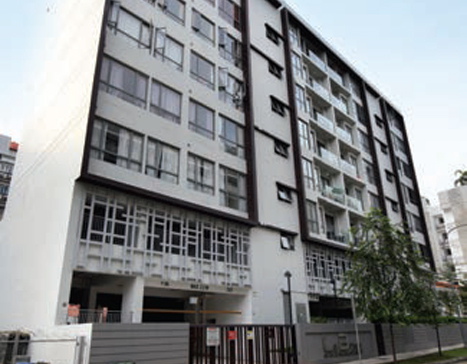 Viento is a 48-unit freehold condominium project by Teambuild Land, was completed in 2013 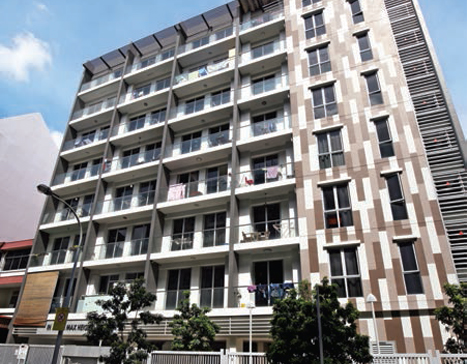 The shortage in supply

When existing residential development in Geylang such as the 65-unit Rezi3Two by Tee Realty, Kim Seng Heng Realty and Heeton, the 30-unit Loft 33 by Macly Group, and the 145-unit Guillemard Suites by MK 25, are completed within the next two years, there will be no new developments in the pipeline in the neighbor of Lorong 26 to 38. This could be good news for owners of the existing developments.

Savills’ Cheong noted that if there is no additional supply in the foreseeable future, it will take another six to 12 months before rents start to move up. He predict a 10% upside from contemporary rental levels of between $2,000 and $2,100 to $2,200 to $2,400 per month within the next 12 months. He added that at the peak of the market in 2012, rents of shoebox units in Geylang had been at least $2,600 per month.

Even if at today’s lower rents, yields are still in the 3%-to-3.5% range. he added whenever he walked around the area, he could see that most of the developments were quite well taken up. He would place the average vacancy rate at 5%, and units were being filled up.

The current shortage supply of new residential choices in Geylang means existing freehold properties will have the potential to appreciate further. Cheong considers that rental yields and capital appreciation will attract investor interest back to the area.

Early last year, there will be no new residential developments between Lorong 4 and 22, that was announced of the URA. ERA’s Kong saids that meant there was an chance for this section of Geylang, between Lorong 26 and 38, to be rejuvenated from an old estate to a new commercial hub. The accessibility of Geylang to the Paya Lebar Central is another attraction.

Tee Realty, Kim Seng Heng Realty and Heeton developed Rezi3Two, which is a freehold 65-unit project, is scheduled for completion in 2017 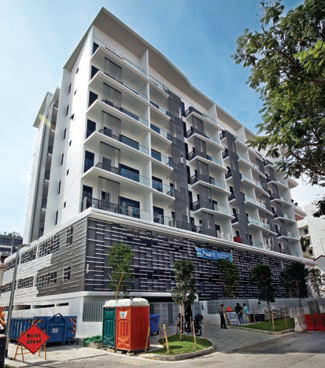 Loft 33 is a 30-unit freehold residential project developed by Macly Equity, is expected to be completed by 2017 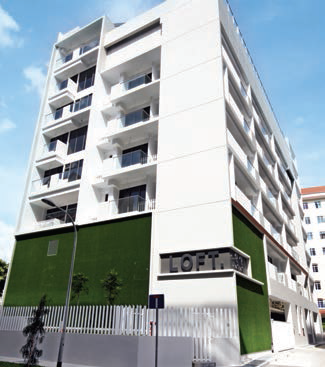 The stable price of Condo in Geylang

At prices ranging from $1,200 to just under $1,500 psf, Freehold condos in Geylang Lorong 26 to 32 that were completed over the past four years have changed hands.

Several other projects were developed by Macly Group in Geylang. One of them is the 27-unit Cassia Edge on Guillemard Road. Completed in 2015, the most recent transaction at the freehold Cassia Edge was in October 2014: A 646 sq ft two-bedroom unit on the third floor was sold for $860,000 ($1,332 psf). Next to Cassia Edge is the 275-unit Guillemard Edge. Completed in 2014, Guillemard Edge is sold out. According to a caveat lodged, the most recent transaction was a 560 sq ft, two-bedroom apartment on the sixth storey that transfered for $758,000 ($1,354 psf) 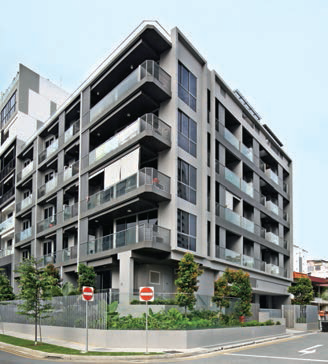 Find Out More About Attractive Cassia Edge In Geylang

Guillemard Edge includes 275 units developed by Macly Equity was completed in 2014. All 275 units were sold out within two weeks of its launch in 2012. 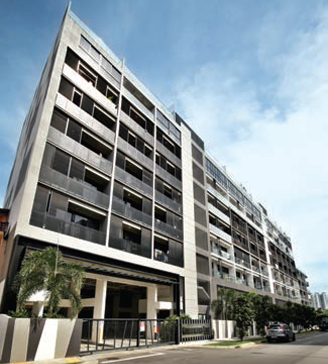 Newer developments are even at a price within the range of $1,200 to under $1,500 psf. There are two freehold condominium projects that are under construction along Lorong 32, namely Rezi3Two and Loft 33. Both developments was expected to be completed by 2017.

Thus, the opportunity in Geylang is seen by Savills’ Cheong, where the price and rents have been comparatively stable. He said that people should take a closer look at the part of Geylang closer to Paya Lebar, which was also being redeveloped. There was hardly any hint of the old Geylang there. It’s the lower, even-numbered lorong that will give you a collection of the sights, colours, sounds and smells of old Geylang

Geylang is a prominent area with a lot of interesting things. Explore more of the latest Geylang News here to learn more about this area.

This article appeared in The Edge Property Pullout, Issue 753 (Nov 7, 2016) of The Edge Singapore.

Email Us To Get The Latest New!